The cobalt blue tarantula (Haplopelma lividum) is native to the tropical forests of Southeast Asia, a beautiful spider about five inches long (including the legs). 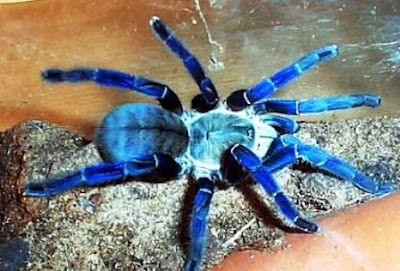 It may look dark brown or black at first, but in the light, its bright cobalt blue colored abdomen and legs become evident.

The female is larger, nicer looking, and lives years longer than the male.

Unfortunately, it's a very aggressive and fast spider, an expert escape artist with a painful, venomous bite.

People have described this spider as "psychotic", "nervous", and "high-strung" ... but think,  they are likely just afraid of people. If some giant monster was trying to grab you, probably you would bite, too!

In any case, this tarantula is only recommended for people very experienced in caring for tarantulas.

Touching or handling this pet tarantula isn't advisable -- even the baby cobalt blue tarantulas have been known to bite, and some people have serious allergic reactions to the venom.

A ten gallon terrarium with a screened lid should give your tarantula plenty of room.

It usually lives in warm, damp burrows, so you should fill its home with 8 to 12 inches of a material like potting soil, peat moss, or coir (coco husk).

Keep it moist by spraying it with a water bottle a few times a week.

If the temperature in the room is less than 75°F/28.9°C your tarantula will be happier with a heating pad under the tank.

Your tarantula will like an above-ground hiding area and a shallow bowl of water once it has grown to three inches across (including the legs).

These spiders don't like bright lights and like to spin huge webs, which can make it hard to see them sometimes. But never put your hand in the tank!

If you need to move your spider, gently nudge it (with a stick or tongs) into a box with some small air holes cut into it, close the lid, and move it that way, being very careful not to let it escape.

If it does escape and falls to the ground it will likely die from the shock. 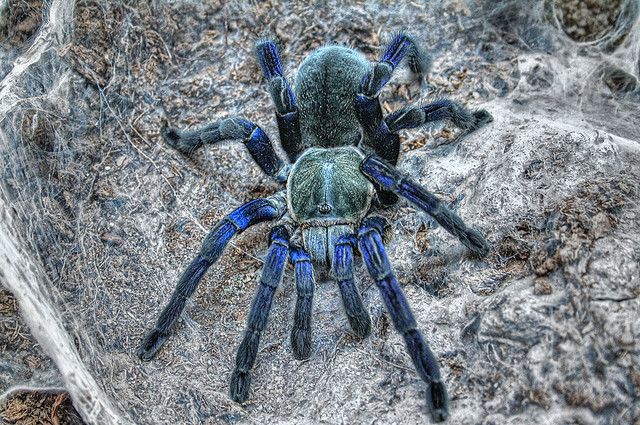 Cobalt Blues will eat well on a few live crickets, cockroaches, or other large insects a week.

Other things they like to eat are mealworms and baby mice.

Remove any dead or uneaten food with tongs.

Tarantulas molt when they grow larger, so if you see your spider on its back it's probably molting.

Do not try to feed your T when it is molting -- the intended food might instead kill and eat your tarantula!

When it's done molting, you will see what looks like another spider in the tank, the second being the exoskeleton (like when a snake sheds its skin).

For a few days, your tarantula's exoskeleton will be pale and soft, so make sure not to touch it or feed it until the spider returns to its usual color, to prevent any damage to the newly-molted T.

© Copyright 2017-2023 by EverythingCobaltBlue.com
All rights reserved. No reproduction without permission.